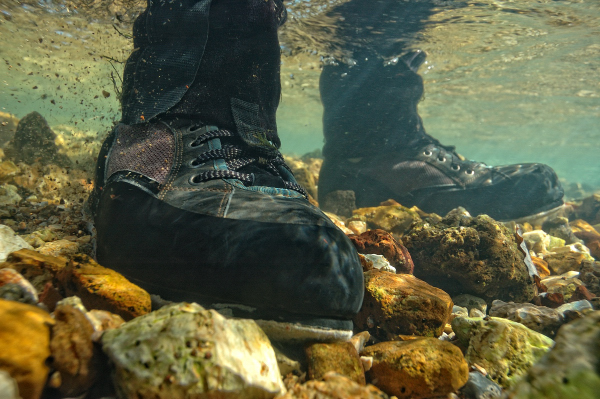 It looks like the Missouri Department of Conservation is going to get serious on Diddymo in the State of Missouri.  In the coming weeks, they will be holding workshops throughout the state to discuss the effects of Diddymo and hopefully educate anglers about the topic (although I wonder why they didn’t reach out to some of the fishing organizations such as the various FFF clubs or smallmouth alliance clubs throughout the state, or have some of the meetings in more populated areas).  In addition to the meetings, they have installed wader wash stations at each of the trout parks, that are set to help rid your waders / wading boots of invasive species by using a 5% salt water solution.

As I have stated before on my blog, I am not 100% sold on the idea of banning felt soled boots.  To me, there are just way too many other places that could transfer invasive species.  I think the answer lies in angler education and understanding the effects of the invasive species and how to eradicate it once in the stream.  That being said, I did just order a pair of Korker boots with the kling-on rubber soles (both regular and studded), but I couldn’t help but order the studded felt too…..just in case and have been very proactive in the cleaning and drying out of my fishing gear when i go anywhere.

Here is what was written on MDC’s website regarding the wader stations and Diddymo:

One new feature at all four parks this year is the availability of wader-wash stations. These are baths with a 5-percent salt solution for boots and fishing gear. They are designed to kill the aquatic invasive species, Didymosphenia geminata. commonly known as Didymo. It’s less appetizing nickname, “rock snot,” captures its slimy experience and general undesirability.

Didymo is an invasive alga that forms dense mats on stream bottoms. It can become so thick that it disrupts natural food chains, making fishing impossible. Its arrival in trout streams around the globe probably is the result of its ability to cling to the porous surface of felt-soled fishing waders. Didymo is known to infest streams in 19 states. The infested stream nearest to Missouri is in northern Arkansas.

“We strongly encourage anglers to make use of the wader-wash stations to clean not only waders, but any fishing equipment that has been used in other states,” said MDC Hatchery Systems Manager James Civiello. “Anglers can unknowingly spread the microscopic alga on fishing gear, waders, and especially in any porous materials on wader soles.”

Civiello said anglers can help prevent the spread of rock snot by cleaning fishing gear and waders and drying them in the sun for 48 hours when moving between waters. They also can help by replacing felt-soled waders with rubber-soled ones.

You can also plan on attending one of the MDC Public Forums on Diddymo on the following dates:

You can read the whole article regarding Missouri Trout Parks opening day and trout fishing in Missouri, by clicking on this link.