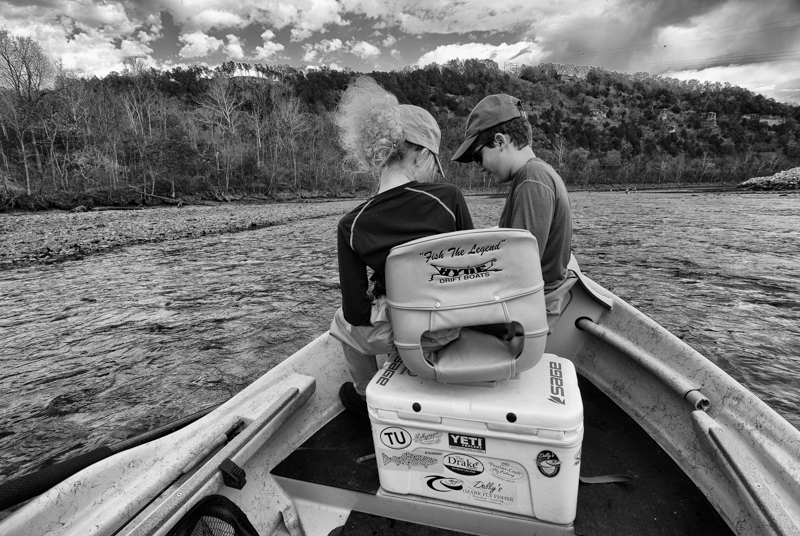 It has been a few weeks since my most recent trip to Dry Run Creek with Hannah.  I had worked out the details of a Dad/Daughter and Father/Son trip with my buddy Craig Peterson and his son Grahm Peterson and my favorite 10yo daughter, Hannah.  It was Hannah’s first trip to Dry Run Creek of the fall, and Grahm’s first trip ever.  We decided to head down for the weekend and mix it up a bit with a quick float on one of the tailwaters and some visits to some local fly shops in between time on Dry Run Creek.  It was a good weekend and the kid’s caught lots of fish, but in keeping with OzarkChronicle’s tradition, Hannah’s fishing trips are always told….in her words…

Friday started out pretty slow. Craig and Grahm showed up later then me and dad thought they would. When they got to our house it was dark. We started our trip around 6:15. I was so tired so I went for a nap. We stopped for some food because the boys didn’t eat dinner. I tried to go to sleep but I couldn’t go to sleep so dad changed the music to some Jack Johnson. I finally got to sleep. I woke up and we were at Mountain Home. That means we are there. Dad and Craig got our room keys and we got to our rooms. We unpacked and I laid down on the bed. When dad was tying some flies he cut himself with some scissors. He was gushing blood. We didn’t have a first aid kit. So dad went over to Craig’s room to see if he had a first aid kit. He didn’t so they put some tissues and some duck-tape. After that I went to bed.

I woke up at 5:00 A.M. It was a early start but once I was a up I was awake. I had a nice breakfast of mini donuts. When we got to Dry Run Creek we were all wader-up so we could start our way down to the stream.  Me and dad went upstream and Craig and Grahm went downstream. Me and dad started to look for big fish off the dock. Spotted one and guess what I caught it. We went up a little in the stream to a very nice spot. There was a bunch of nice looking browns. I caught a couple and even when I was going to cast again I hooked a fish. It wasn’t too big but a good size. We went even more upstream to my favorite spot ever. It was a pretty fast current. It didn’t have very big fish. So we went up a ways where there is a long island almost. It had some big browns.  There was a 30” brown that was humongous.

I fished to it for a while, but I don’t think the fish was hungry. After that dad and I went down stream to find Craig and Grahm. When we found them I was done fishing I had wanted to go in the boat so bad. I had never been in the boat before. We had brought the boat to float down the river.

Before we floated in the boat we got in the car and went to Dominic’s fly shop.  Dominic is a friend of my dad and Craig. Dominic has a beard and looks like he is from the show Duck Dynasty.  When we got to the shop a cute dog came out, the dogs name was Elvis. The dog made me miss my dog. The guys stopped talking and found out where we were going to float. After that we got in the car and left for another long drive. When we got there, dad had to leave again to shuttle. That took 2 or 3 hours. When he got back he told us he got a ticket. Then finally we got on the water and began our mystical journey.

It was pretty slow but a cool experience. It was also a windy day. For lunch we had sausage, cheese, and crackers. It was pretty good.  I also liked when I got to row. Craig even caught a fish when I was rowing. I didn’t catch a single fish on the boat. It’s hard to fish in the boat when it’s windy and your first time in the boat. It took like five hours, but it was fun. I helped unload the boat and put it on the ramp. We got into the car to take the long drive home. When we got back to the hotel we chilled out, but I couldn’t chill out cause I really wanted to go to dinner and get calamari. It took a couple hours but then we got to the restaurant. When we got there we sat at a table. It was their 2nd year anniversary so there was a live, loud band. The Wise’s came and we ordered are food.  It was good food. Later on Dominic came and convinced our waitress he was from Duck Dynasty.  She believed him for a little then, she was said” Let me see your I-D” and he was mad. After that we went back to the hotel and I went to sleep.

When we got up on Sunday morning we got dressed, but not in our waders. For breakfast we all went to White Sands restaurant. My dad said it was a institution. It was ok. I didn’t think it was that great. When we got out of the restaurant the sun was just rising. When we got to the car we left for Dry Run Creek. It took a while cause we had to get our waders on. I also had to put on my pig hat. I have to wear it because I promised Brain Wise I would. Another reason is that I’m only catching pigs. Also I have to squeal like a pig. When we were ready dad and I went down to the spot where the 30” brown was. Sadly it wasn’t there, but there was some pretty good size fish. So I fished there for a little while. I was catching fish like crazy. We went upstream a little bit because we didn’t get too yesterday. I saw a big, huge fish. I fished for it. It didn’t budge. I cast a couple more times. Then finally the fish went for it. And let me tell you he was a fighter. Dad actually tried to net it. The fish kept going up and down stream. When the fish was going up-stream slack came out because I wasn’t reeling fast enough and the fish snapped off and the rod came flying back at me and hit me in the face. I told dad it broke off and he didn’t hear me. Finally he realized the fish had gotten off. After that I was done fishing for the day. Dad and I found Craig and Grahm and said we were going up to the car and you could meet us up there so we can pack up. When we got to the car I got out of my waders and in to good car cloths. And at that time Craig and Grahm came up and were ready to leave. When I got in the car I was so tired so I took a nap. When I woke up it was lunch time. We went to a Mexican place it was good. When I came out of the restaurant I went to sleep. When I woke up it was raining I listened to music and jammed out till we were home. When I got home we quickly unpacked cause it was still raining. That was my fishing story.

It is always funny what she remembers from our trips together.  It isn’t always about the fishing, the catching, the food, or the laughs…..it is about a combination of it all.  I am a lucky guy to have such memories of her on the stream with me.  Until next time.