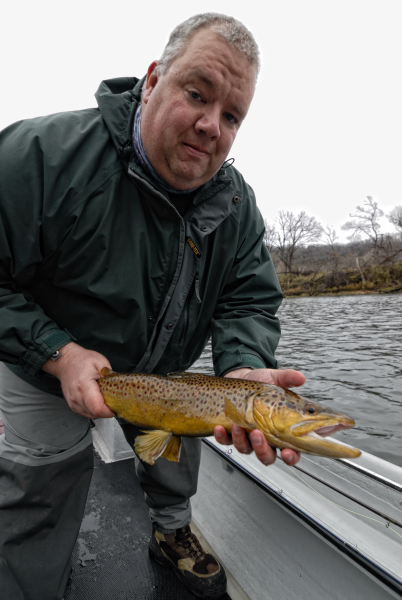 Evan Muskopf and I headed south on Thursday (02-02-2012) to meet up with Paul Chausse, Dan Held, Ray Reidy, and Jeff House for a three day fishing trip on the White River.  It is sort of an annual February pilgrimage for me, yet it had been a few years since JimmyT and I had fished together in February.  With that in mind and despite the drift boat in tow, we jumped at the chance when JimmyT offered the opportunity to get Evan and I out in his boat for a day of fishing.

We arrived late on thursday night and after a little scheduling conflict (and my lack of procrastination in reserving my RV for an additional night), we grabbed a room at River Rock Inn in Mountain Home.  We were up early and on the way to meet JimmyT, we stopped and picked up Ray Reidy and Paul Chausse at Wildcat Shoals Boat Ramp and shuttled them back to the Dam Site put-in for their 11 mile float.  After some breif catching up, they were on thier way and we were on our way to meet up with JimmyT at his Wishes & Fishing Fly Shop in Bull Shoals.

We wadered up and dropped his boat in for a very wet day of fishing.  The rain was fairly consistent throughout the day, with some downpours here and there.  The fishing was consistent enough to keep us interested, but the big fish on the streamer bite wasn’t really there. We focused our efforts mainly on the catch and release area, doing several drifts and picked up the occassional rainbow; but the big browns eluded us.  Perhaps it was the number of boats that were out there (at any time there were at least 12 boats within eye site).  At JimmyT’s urging, we switched to one of his rigged up 11ft nymph rods and on the first drift I picked up a “barely 20 inch” brown trout.  It was a good fish, and only on the White River can a guy be a little disappointed with a 20″ fish…..but I know better on this river.  We got lots of love on the nymph rig, but our hearts were with the streamers so we switched back and threw more meat the rest of the afternoon with the same results.  The thing is, though, that even with the weather being as wet / cold as it was; JimmyT was on his game keeping the boat positioned perfectly and giving us the shots we needed.

As the day wore on and the temerpature began to drop with the river level (the generation was letting up), I asked for mercy as I was wet and cold, so we headed back to the ramp and to Wishes & Fishes Fly Shop for some beers and catching up out of the rain.  We headed back to the Bull Shoals State Park Rent-An-Rv and unloaded our stuff and plenty of food / drink were had as the entire group (Evan Muskopf, Brian Greer, Dan Held, Paul Chausse, Ray Reidy, and Jeff House) were present and recounted the day before more storms rolled in.  It was a great way to start February, even though the truly big fish didn’t cooperate.