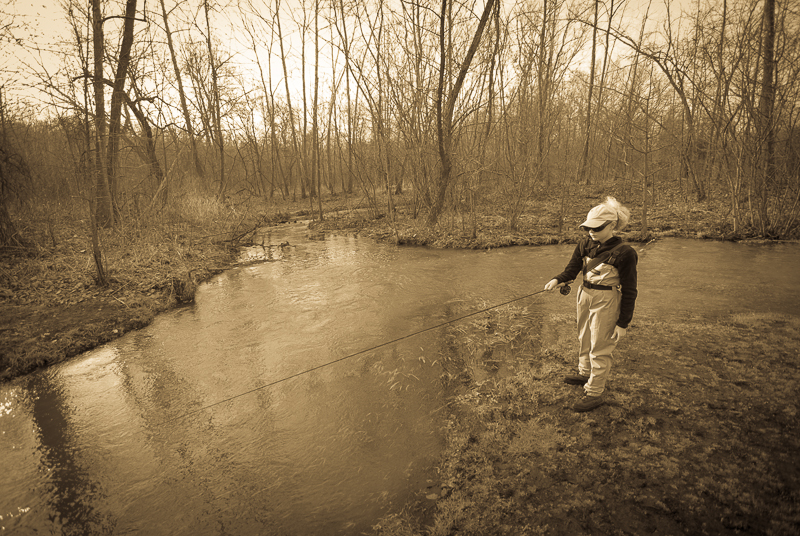 Westover Farms near Steelville, Missouri is such a special place. The property and private trout stream have been through some ownership changes over the past years, but we are fortunate that the current owners share a love for the outdoors and a willingness to share it with others for a small fee. Best of all, they recognize the importance of kids fishing and offer discounts for children to fish their waters (and their dad’s to tag along to photograph).  Hannah, Bill Hentchel (my father-in-law), and I made the trip down to Westover Farms for a quick morning trip to get Hannah on the water.  After a quick morning stop at Lewis Cafe in St. Clair, Missouri and some of the best biscuits and sausage gravy served in Franklin County, we were headed southwest.  This was a relatively short trip, with the wind making it difficult for Hannah, along with the higher than normal flows, she quickly lost interest.  Rather than forcing her to battle through it and regret coming, we packed up when she was ready to head back and made the quick 1hr trip back to the house.  Even if there were not any trophy fish to photo, it was still a great day out on the river with the coolest fly girl I know. 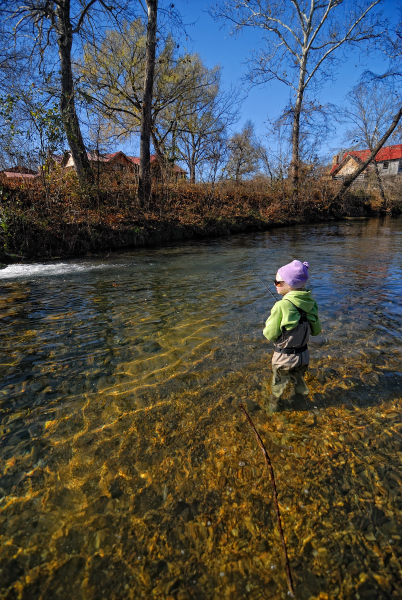 A lot has changed over the years for at least one of Missouri’s private trout fisheries, Westover Farms.  Rumor has it, that Westover Farms is now tied up in some sort of bankruptcy / foreclosure / FDIC debacle; but that doesn’t change just how special this particular piece of property is (hint:  you can read about the rumors here).  Rumors or not, Tom and Lisa (the caretakers), are still employed and operating the property for the bank and believe it or not, you can even still fish there and book lodging and what not.

Hannah, my 8 year old daughter, has been on me about getting her back down to Dry Run Creek, but work obligations have kept me in St. Louis more frequently than in years past and I haven’t found the time to get away.  Enter Westover Farms.  Kids 12 and under can (with reservation and possibly a paying adult) fish for free.  A quick call and return call from Lisa and Hannah was all set up.  With temps set to be in the low 20’s in the morning, I did my best to convince Hannah to postpone the trip (admittedly she doesn’t have near the clothing to stay warm while fishing in such cold weather), but she would have none of it and even teared up at the thought; so the trip must go on.  I did my best to postpone the inevitable cold start with a long breakfast at Cracker Barrel and by 7am, we were off to Westover.

The fishing was, as it has always been, good.  But it was apparent that this isn’t the Westover Farms of Springrise at Westover days.  The fish in the “garden section” of the stream were actually pretty wary of people and casting a shadow on the stream caused them to disappear into the various undercuts and vegetation and what not.  Because of this and the vegetation that was let to grow along side of the stream in this section, it required a little more accurate casting and line control than what Hannah possessed, so we headed off down to the creek section of the property; where Hannah found her grove and immediately started picking up yearling…park marked / white tip finned rainbows…..with relative ease in various riffles on a San Juan Worm that she had tied herself.  As we walked the property, we ended up down where the “garden section” dumps into the creek and the fish were stacked up as they had always been.  Hannah was mesmerized by all the fish in this section, but there was already a guy fishing this section (with little success), so we decided to try and wait him out, as he was there first.  But there is only so much waiting an 8yo can do, so when the guy stepped out of the stream to take a leak, I told her she could start casting and she immediately started catching fish.  The more she caught, the harder the other guy tried, but with no luck and he reeled up his line and walked away without saying a word.  I am not sure if the guy was pissed that we “low holed” him…..if that is what you want to call it, or that he was being out-fished by an 8yo; but either way Hannah thought it was pretty cool that she was catching more fish them him……and quite frankly, so did I.

On a separate note, Brent McClane met us down there to try out some new video equipment that he is working on, and I am really hoping to see some uber cool stuff coming from him soon.  All in all, it was a great couple of hours on the water with Hannah and looking forward to more in the future.  The trip wasn’t really about shooting photos or what not, so i only snapped a handful of shots, but the gallery is below.

I had a group of clients / coworkers that McClane and I took down to Westover Farms.  They were complete newbies, but they all caught fish and we had fun….if you haven’t seen Westover since it changed hands you definitely need to).  We caught fish, and I managed to scratch a nice fish or two during lunch break.