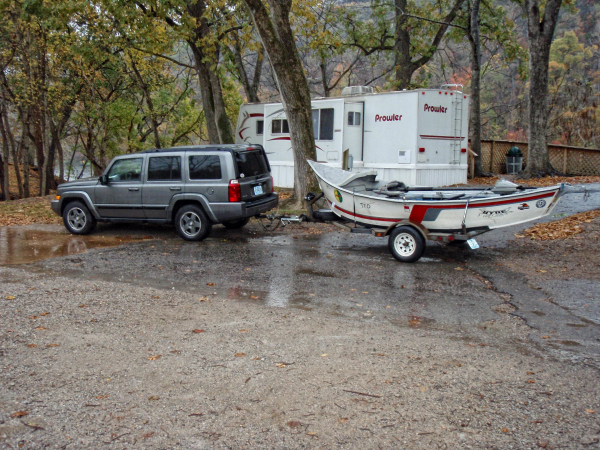 At some point during a summer filled with long hours at the office and cramming for an AISC Certification at work, I decided to send out an email to all my Facebook fly-fishing friends about my need for an extended fall weekend on the White River in search of some autumn brown.  What transpired was an invitation to about 60 for the first White River Scotch, Barley, & Fly-Fishing Social to be held at Bull Shoals State Park on 10-26-2011 to 10-30-2011.  Of those invited, about 10 various characters showed up (Evan Muskopf, Craig Peterson, David Stinnett, Dan Held, Paul Chausse, Ted Calcaterra, Pat Travers, Doug Thompsan, Brian Wise, Brian Greer, Jimmy “T” Traylor, Ron Yarborough, and maybe a guy or two more I have forgotten).

The word for the first day was WET.  It rained all day.  The temps didn’t get out of the 40’s for very long.  The only thing that was missing was wind, and this would have been the most complete day on the river.  We decided to drop the two drift boats in at the base of the dam and float to Wildcat Shoals Boat Ramp (about an 11 mile float or so).  With Evan Muskopf and Craig Peterson in my boat, combined with the overcast skies and rain the order of the day was streamers.  We were not rewarded with many fish, but both Evan and Craig got some good follows throwing various Galloup flies (sex dungeons, circus peanuts, and peanut envy) with Evan recieving the biggest follow and eat twice but no hookup.  The rain, combined with few fish made for a long day on the river.  Dan Held and Paul Chausse floated the same section with us, and were throwing some meat to, and were rewarded with a brown just over 20″ or so very early in the trip — needless to say are expectations were high for the day.  The photography would have been stellar except the rain kept the camera in the pelican case most of the day, except for when we pulled over at the Narrows and nymphed and swung streamers for a bit (with only dink rainbows the reward).

We pulled off the river and headed back to Bull Shoals State Park for a dinner of champions and to watch Game 6 of the World Series (Cardinals vs. Rangers).  We were staying in one of the Rent-An-RV units at Bull Shoals State Park and had satellite TV to catch the game.  Normally the “TV” during a fishing trip is the campfire, but this trip with the World Series had special meaning.  As we seasoned up 24oz Porterhouse Steaks, sliced potatoes for the grill, and prepared the onions for the fire, we started watching would would become one of the most epic world series games of all time.  As we ate like champions, our guest of honor arrived for the night in non other than uber Ranger’s fan David Stinnett.  I am not sure what was more fun, fitting 8 guys in the camper around a 20″ television or the hooting and hollering that was going on after the Cardinals win.  I think we finally hit the sack around 1:30am with an early morning just a few hours away.

The alarm went off early on Friday morning, we were up at 7am and ready for breakfast at Gaston’s by 8am.  Gaston’s breakfast has got to be the best thing going for hot breakfasts on the river, perfect for a hangover cure.  We were going to float from Wildcat Boat Ramp to Cotter, a float of about 7 miles or so.  We dropped the boats in, ran the shuttle and were on the water by about 10:30am.  We spent Thursday cursing the rain, but would spend Friday cursing the crowds and the high bright sun and bluebird skies.  The fishing was a bit slow today, although fish were caught on the usual suspects, Craig Peterson and David Stinnett tried to stick with streamers in my boat as long as they could.  When Craig tired, I turned the oars over to him and I pounded the bank with not even a follow.  We pulled off the river about 3pm and headed back to Bull Shoals State Park.  There was enough light left, and Dan Held and Paul Chausse were looking to try out the motor they bought for their drift boat so we decided to drop the boats back in at the Dam.  My boat was going to float from Dam to Gastons Boat Ramp and Dan and Paul were going to do multiple drifts in the State Park area.  Craig, David, and I had a great float and fish were caught.  I got to toss some streamers again with Craig on the oars and got some eats in the State Park with no fish landed before getting back on the sticks to float the rest of the way out with Craig and David fishing.  Craig was getting constant action on a Circus Peanut as soon as he was back in the game and it was an enjoyable way to finish out the day on the water.

We finished the day back at camp with bacon wrapped pork tenderloin, grilled potatoes, sweet corn, and an apple pie washed down with plenty of beer around the campfire.  All in all a great fall day on the river.

The Norfork was a new river for me to float, particularly at low water.  It was interesting to say the least.  Everyone caught fish and the fishing was better than it had been on the White the previous two days.  The river is more of a “river” in the traditional sense with riffle / run / pool type structure.  It was interesting to float in a few places and we definitely left a few new scratches on the boat bottoms from some direct hits on some of the rocks and chutes.  We actually had to get out and push the boat on 3 different occasions.  But again, the fishing was spectacular.  Craig was a brown trout shy of the Grand Slam having landed numerous cutthroat and rainbows, and picked up his lone brook trout in what used to be McClellan’s Hole (wow did that change from how I remember it…..need some streambank stabilization there).

They turned the water back on just as we were getting to the islands above Handicap Access and we were greeted by an easier float out and fish as well.  What was supposed to be numerous trips down the 4 1/2 mile river turned into 1 float that lasted about 9hrs.  It was a long day, but it was a good day.

With everyone having longer drives than us back to St. Louis, most everyone left early on Sunday morning.  Craig, Evan, David, and I used the opportunity to nurse some hangovers and sleep in, pack up, hit Gaston’s for breakfast and then head back to St. Louis (with David driving back to the Dallas area).  I am not sure how much was drank this weekend, but this trip was about fellowship just as much as it was the fishing.

It was a good trip, the kind that we used to do on an annual basis down on the White River.  I am fairly certain it will be a trip that is more frequent in the making based upon the comments from everyone this weekend.  Until the next time on the river….