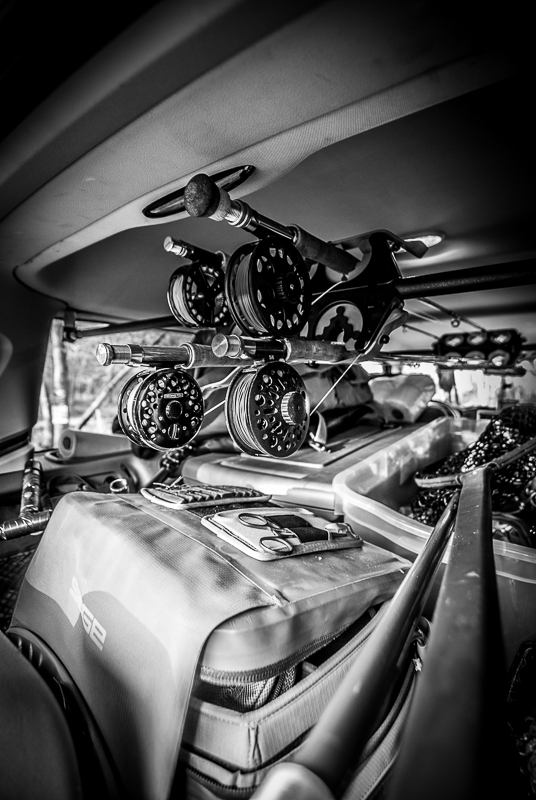 The Missouri Trout Odyssey is a trip that Brian Wise and I dreamed up more than 4 years ago.  It originally started with each of us trying to bluff the other one into a “megatrip in the ozarks”, then it morphed in to how many streams can we fish and how fast can we fish them.  What has resulted is a helluva appreciation for all the trout water Missouri has to offer and a great time in the process, with lots of stories, pics, and videos along the way.  Each MTO is something that really can be explained in words — photos and video do it best.  But the best way to experience it is to get out there and do it yourself…..besides it is only 1200+ miles and 21 trout streams over 4 days.  As the years go on, less and less planning go into this trip, but we finish every trip telling each other that this is the last year we do it…..only to come back a year or two later and do it again. 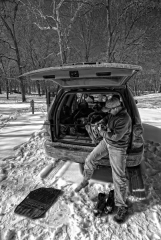 Several years ago, I would frequent the trout parks with great regularity during the catch & release season.  I don’t know at what point I began to change, but I began to become increasingly irritated at the crowds in the trout park (even in the winter), so my fishing shifted to Arkansas and other streams.  It had been awhile though, so when Brent McClane and I were talking about all the trips we have taken together, we agreed it had been several years since he and I traveled to Maramec Spring Trout Park; and with that a plan was hatched.

Southern Missouri got hammered with a snow storm the week of 1/25 and dropped about 6″ of snow near St. James, Missouri with greater amounts further south.  The snow on the ground, combined with temps that were not forecast to get above 30 degrees meant that McClane and I were going to be in for a cold Sunday morning.  To make matters worse, I couldn’t find any of my gloves to wear; but shit happens (one week later, I still can’t find them). 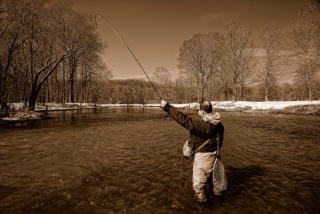 We rolled into Maramec Spring Trout Park around 8:15am, to the sign that read “Free Parking,” which surprised me because in years past we would have had to pay the parking fee to access the property.  When we rolled past the gate, we were immediately greeted by 5 or 6 cars all watching a dozen or so Bald Eagles soar in the sky and roost in the trees nearest the upper parking lot.  Eagles are BIG, especially when you are 50ft from them.  I didn’t bring my 80-200 lens, otherwise I probably could have spent the morning shooting Eagle photos.  Truth be told, I am not set up with the right lenses to shoot bird photos, and not sure I could pull off the panning that needs to occur to really get great bird shots.  But I digress.

We parked at the top of the parking lot, near the handicap hole and began to suit up.  It was damn cold, but we managed and within 20 minutes of rigging rods, loading camera gear, and dawning waders we were on our way to the top of the park.  Everything was white, with bright blue skies and fog coming off the river it made for a wonderful winter scene as we began to fish.

We focused our efforts on the top of the park and the left side of the island and picked up fish at will, once we got the skunk off and the sun came up.  The faster water on the side of the island always holds fish, and McClane sight-fished to a few fish as I shot photos. 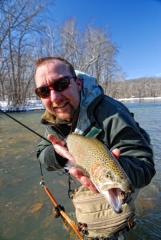 As we moved downstream to the end run, the fish numbers increased dramatically (but so did the people).  It seems that the last few times I remember fishing Maramec Spring Trout Park I always run in to an asian fly-fisherman that is fishing light grey / olive scuds without an indicator using really short drifts, no indicator, and more casting than drifting.  He and I have had words in the past, but he is a nice guy and does catch some nice fish.  He was there again today and we exchanged hellos, as a crowd of other people converged on the run.  McClane and I held our distance upstream until the people moved from the hole, and we moved further downstream.

To be rather blunt, the fishing got stupid there.  Fish were everywhere, and they loved the HotSpot San Juan Worm under a short indicator.  Every drift was resulting in a hookup or take, and it soon lost its interest for me so I used the opportunity to shoot some photos.  McClane changed tactics and began to fish to some of the larger fish with better results and was rewarded with a couple of nice rainbows (see the gallery below).

The clock quickly approached noon, and I had Sunday dinner family plans that I needed to attend to, so we headed back to the truck and stowed our gear and headed back to St. Louis.  It was a great day on the water, the weather turned out to be alot warmer than predicted, and the trip reminded me of trips past and trips i look forward to having.