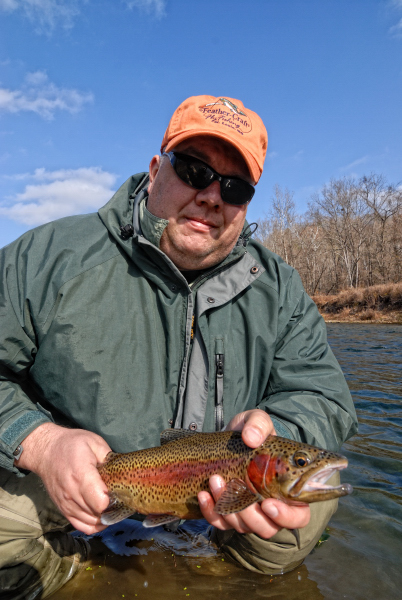 Too much work and no fishing makes Tucker a very pissed off and unpleasant person….and angry man…if you will (or at least that is what I am told).  It had been way too long since I had held a fly rod in my hand and actually got to fish a bit for more than a couple of hours.  With a little bit of planning, Evan Muskopf from Feather-Craft, Brian Wise (head guide at River of Life Farm) and I had planned for a little R&R on the North Fork of the White River with floating on Friday (11/19/10) and Saturday (11/20/10).  The plan was solid and low cost, and I think we each needed it for different reasons.

After a late night catching up around a fire at Brian’s house until about 1am with lots of beer consumed and checking out all the various patterns that were turned in to the Feather-Craft Fly Tying Contest site that Evan and Brian are doing (some really cool stuff……that actually catches fish), we rose early at 5:30am for breakfast at Skeeters in Gainesville, Missouri then off to the River.  The Skeeter’s #7 breakfast is something to behold and definitely kept me full all day…….as we only had planned on a barley lunch on the river with some granola and jerky as fodder.  We rolled into Kelly Ford and dropped Brian’s boat in the water, rigged up and left Evan with the boat as we ran our shuttle to the Blair Bridge Access.  This had us fishing about 5 miles (i think) of trout water on about 315 cfs, which is the lowest I had ever fished the river…..and it is, as Brian had told me “more intimate.”

The fishing was good, but not great.  We first got on the river and rowed upstream to Lamb Shoal and then further upstream to where the spring dumps into the river.  We spent until noon on this section of river, with enough success to keep us there, but we needed to move on and get started on our float to Blair Bridge.  I was fishing a new Sage TXL 6wt 9′ – 6″ rod, and man is that rod money for fishing out of a boat.  I am definitely a believer of the longer rods when nymphing…..and already am eying a 10ft 5wt after casting Evan’s 10ft 4wt.

While the cfs was lower, the fishing methods were largely the same as they were with more flow.  Long dual fly rigs with a heavy front fly and a dropper about 18″ below under a thingamabobber indicator.  One of the benefits of fishing with Brian and Evan is all the cool stuff Brian gets to play with as part of his help with Feather-Craft’s Fly Tying Contest site (big plug for it here, submit a fly for the 2011 contest).  One of the things is Wiggle Dubb dubbing.  Brian started tying a very generic stonefly pattern with originally enough called “The Wiggle Stone” and according to Brian, it had been catching the shit out of fish.  Well, he was right, 90% of the fish we caught on Friday came on this new pattern.

The North Fork of the White River is such a jewel trout stream.  We floated the entire day and didn’t see another fisherman, and the weather was a little cool but definitely beautiful.  I didn’t worry about the camera or photos and actually enjoyed a day on the water.  We couldn’t have spent a more relaxing day on the water, with the first beer being popped at 8:30 and the last being consumed around a camp fire about 12am….leaving just enough time for sleep in order to do it again on Saturday.  The photos from Friday are in the gallery below.