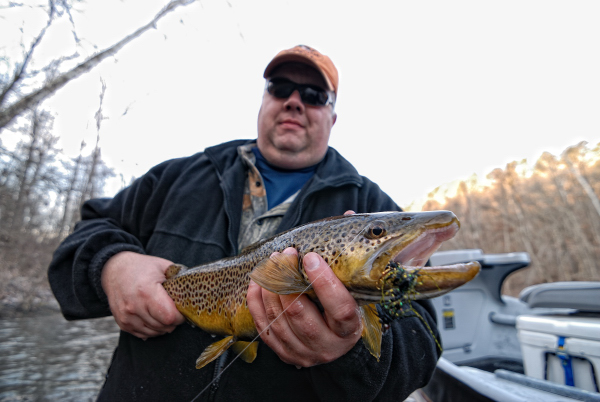 After the day Craig had on 12-17-2011 in his first float down the North Fork of the White River, things were looking up for our Sunday morning float on 12-18-2011.  We were up early, a little foggy from the beers the night before, but the biscuits were in the oven and the eggs were on the stove.  We were packed up and waiting on breakfast and Brian Wise, who was going to join us on our float as well on Sunday.

After the success we had on Saturday, we had arranged for a shuttle from ROLF to Blair Bridge again and after a quick bite and loading up the car, we headed down to the field and dropped the boat in.  Brian took the sticks first, as he wanted to see how my new boat handled….which meant that I got to fish for a bit.

Streamers were the order of the day, and I was throwing a 200grain sink tip along with an articulated Bully Streamer tied by Florida Guide, Brad Karczewski, at FlyDaddyShop.com.  The first fish of the day, was coincidentally my first fish out of my new boat, and it was approaching the 20″ mark, but just not quite there once we measured it.  Still a nice brown by anyone’s standards on the NFOW and it set the tone for our quick float.

We picked up the occasional fish the rest of the way throwing big flies, but no more big fish to speak of.  It was a good trip though as Brian, Craig, and I shared many laughs and stories as we floated the 3 miles or so to Blair Bridge.  All in all it was a great way to finish up the weekend.  We shot lots of photos and Brian shot some video (you can see some footage from this weekend in his 2011 Fall Fly Fishing Video), and the new boat is everything that I had hoped it would be.  Until next time.