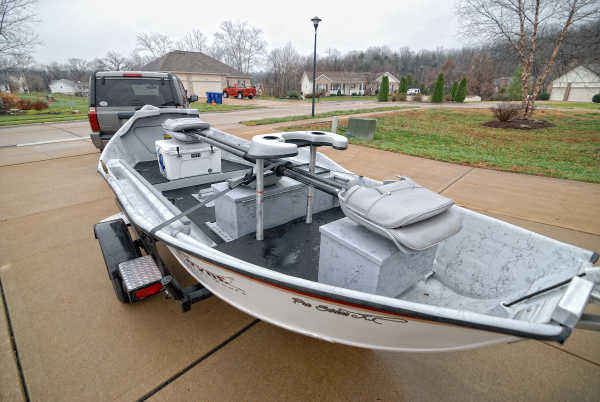 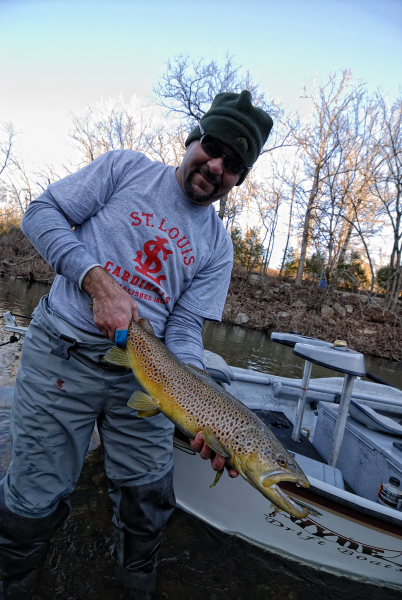 A few weekends ago on the North Fork of the White River, was a trip that won’t soon be forgotten.  Craig Peterson and I headed south to River of Life Farm on Friday (12/16/11) to the Tree Top Loft cabin we had rented for the weekend as a base camp for the maiden voyage of my recently upgraded drift boat (i traded up from the old Hyde high side, to a 2010 Hyde LowPro XL with all the trimmings).  We didn’t get in until late, and we still needed to arrange a shuttle with Myron McKee before hitting the river, so we decided to enjoy the weekend and not rush out to the water, no matter how much the urge strikes us….the fish will always be there; or so we thought.

We were up around 7am on Saturday and quickly to work loading the boat as breakfast cooked on the stove (Hasbrowns, and Biscuits & Sausage Gravy).  After breakfast we headed down the hill to arrange for our shuttle and dropped the boat in.  Brian Wise couldn’t fish with us on Saturday, so we were on our own for the day.  It has been awhile since Craig and I were in the boat together, and it was a good time as usual.

We floated from ROLF to Blair Bridge Access.  Sometimes, as a fisherman, you are lucky enough to go on one of those trips.  This was the maiden voyage of the new boat, and on the first cast on the first drift, Craig hooks up with a nice brown over 20″.  What a way to start off the drift.  We continued to throw big nasty streamers the entire drift (except for those instances we got out and wade fished, then a nymph rig was our standard set-up).  There isn’t a whole lot more to say about this trip, that the photos can’t say.  This particular float was filled with several firsts:  the first fish caught in the new boat, Craig’s first wild rainbow, Craig’s first fish over 20″, and Craig’s biggest brown trout today (coincidentally, not his first over 20″ this trip).  It was a crazy good day, and one that the North Fork of the White River will give up from time to time if you believe Brian Wise……..and as the photos indicate, he was right.  We were off the water by 4pm and back at the cabin by 5pm and awaiting the arrival of Brian & Jenny Wise for dinner and drinks.  A few night caps later and countless stories we were lights out and awaiting our drift on Sunday….another day filled with firsts.