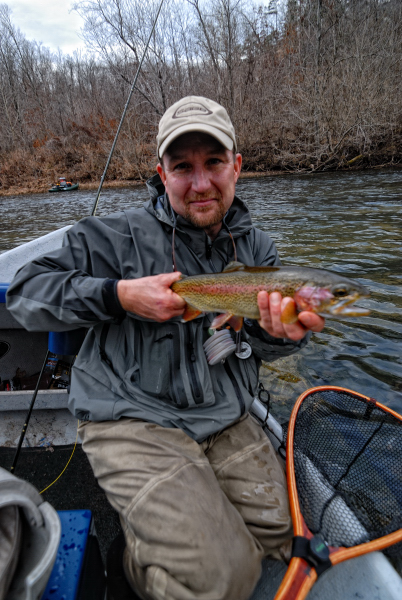 I couldn’t think of a finer way to ring out 2010 than drifting the North Fork of the White River with my good friend, Brent McClane.  This trip kind of just happened without much forward thinking.  Up until Wednesday (12/29/10) we were kicking around the idea of heading to Louisiana to try our hand at fly-fishing for Red Fish, but the pocket book, lack of planning, and our love for all things Ozark won out and we found ourselves driving towards Gainesville, Missouri on Thursday morning to pick up Brian Wise’s drift boat (he had promised a weekend away from his trout fishing bretheren, but did offer up the use of his boat……to which I obliged) and visit with them a bit before heading to River of Life Farm on the banks of the North Fork of the White River.

Unfortunately, the storm system that ravaged parts of Missouri and Arkansas on New Year’s Day also took its toll on our fishing trip.  We woke up to 62 degrees and a cloud system moving in as fast as I can remember ever seeing one move in.  With cell phone reception being spotty, we searched for a brief signal to check out the National Weather Service Storm Prediction Center web site to see what the outlook for weather is today and then checked the various warnings and statements issued.  What we found was the the NOAA had issued a statement essentially saying that there was to be “Extreme” weather today.  McClane and I knew we were in for a treat and discussed storm chasing for the day, but knew we were way late in the game and didn’t think we had enough time to get in front of the storm as it was already 7:30am.  So we opted to not drop the drift boat in, and headed to Blair Bridge Access to wade fish until the storm hit us.

We got a good 2 hours of fishing in before the storm hit, and the fishing was solid as we were picking up rainbows on brown rubber legs and various different droppers.  I managed to land two dink smallmouth and a small brown trout, and McClane picked up a number of young of the year rainbows.  With the thunder rolling, the lightening starting, and it as dark during the day as I can ever remember it, we headed for the car just before the rain hit and headed back to ROLF.  We stopped for cell coverage to check our messages and had plenty of messages telling us to get off the weather, as well as messages from concerned friends about our homes back in St. Louis as apparently the storms had started hitting St. Louis or were about to.  After a couple of quick chats with my wife, who was down in our basement as there was a tornado about 7 miles away in Fenton), all was well and we continued our drive back to ROLF.

By the time we made it back to ROLF, the storm had passed and we were looking at windy conditions and blue skies.  We grabbed some quick chow, asked Myron to run a shuttle for us to Blair Bridge Access, and we dropped the drift boat in and set off on a 4 1/2 hr float.  We immediately got into fish, again on brown rubber legs and various droppers, as we floated downstream.  The fish were holding in the faster water, and it seemed that every drift was rewarded with at least a take.  We stopped off and wade fished a couple of the runs and swapped on and off of the oars, but we had a stellar day on the river bringing well over 30 fish to boat and had hook ups / LDR’s with close to as many fish.  It was a fun day on the river, fishing with temps in the 60’s and falling on the last day of 2010.

Just above Blair Bridge we ran in to a guy on a pontoon with a black lab.  He was definitely a friendly fellow, as we had ran into him just as we put the boat in, but fished pretty slow to give him some room between us and pretty much didn’t see him up until this point.  He was a friendly guy and we chatted a bit, before moving on.  He was the only person we saw fishing on the river all day, and it made for a pleasant day.

We finished the day back at ROLF grilling porterhouse steaks, potatoes, and vadellia onions, and were off to bed by 9:30 tired from a great day of Ozark fly fishing.  It was a perfect way to end 2010.