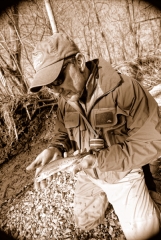 During the 2008 and 2009 Missouri Trout Odysseys were my first taste of fishing Crane Creek.  During our first visit to the stream, we admittedly hadn’t done enough homework to know where to effectively fish and we had our asses handed to us.  The fish were spooky in the City Park, which is where we spent our time fishing that year.  We were itching to head back there for the 2009 Odyssey, and had done a little more homework and fished the upper river at the Wire Road Conservation Area.  It was during this time that both Brian and I really appreciated all that Crane Creek had to offer, or so we thought.  Fast forward to this Saturday.

Brent McClane and I had had a trip to Crane on the calendar for awhile now, and with the nicer weather this was the weekend that we could make it happen; although a dead alternator in McClane’s truck on Friday almost kept him from making it to my house to depart, he overcame that and we were off, for 4 1/2 hours of highway driving bliss.

I am normally a planning son of a bitch, but as time goes on, the less I like to plan things out.  I didn’t really remember which town Wise and I had stayed in last November near Crane and hotels / motels aren’t exactly lining the streets once you get away from I-44; so a quick 10pm call to Wise and a reply of “i don’t freakin’ remember” meant that we would just drive our way back to I-44 and the metropolis of Mt. Vernon, Missouri. 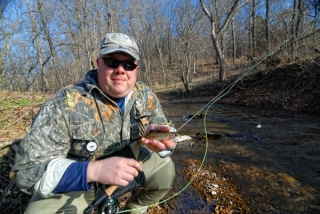 Late to bed, late to rise, we were on the stream by 8am on Saturday morning at the middle Wire Road Conservation Area parking lot.  Armed with my 7ft 3wt, I headed down to the stream while McClane rigged up and was rewarded with my first McCloud Rainbow of the day.  A pretty little fish, for sure, and like that we were in for a great day. 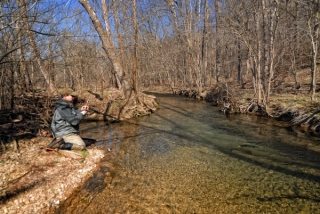 We fished our way upstream from the parking lot, until we got to the area where the river bottom is both on the right and left of the stream, it was there that we ran in to another angler (who had introduced himself earlier that morning while looking for an access, turns out that he and I visit the same internet forum from time to time, so running into him was cool) and decided to quickly fish our way back to the car and check out some of the other accesses.  The flies that picked up fish were micro eggs (#18), san juan worms (tan), copper johns, psycho prince nymphs, and yellow wire rib soft hackles, all fished under an indicator (most of the time it was a micro thingamabobber).  The fish were holding in the deeper water around structure, not sure if that was because of the winter time, the clear water, or both; but we didn’t pick up a single fish in any riffles (but did in some tailouts).  I did manage to hook up with two nicer fish on this section of stream, the first had a deep red band but that is all I was able to see and after about 3 seconds it was over.  At the end of the day, I hooked up with a nicer fish (that I never saw, but felt heavy) but in an effort to land the fish and take out my camera at the same time, the fish headed for an undercut ledge and dislodged the fly — so it goes sometimes. 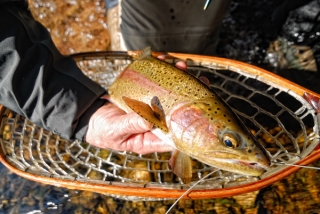 The big fish landed on this section of stream went about 15″ and was 100% wild (as are all the trout in the stream), it was McClane’s biggest Missouri wild trout to date which was really cool and it was one of only a handful of fish I actually pulled the camera out for while he was fishing.

After wolfing down on some lunchables and power-aide in the parking lot, we headed towards the City Park and in search of the ever elusive “Dairy Farm” access; but not before noticing a surveillance camera in the parking lot we were parked in.  The camera was perched on a new light pole at the end of the lot and can easily get the license plate numbers of all that park in the lot and visit the area.  I was really glad to see this installed there, and hope this is a sign of things to come at other MDC accesses.

The rest of the day was filled with trying to avoid the crowds at the Crane City Park, wasting too much time fishing to a sucker that I thought was a trout, and fighting the wind with my 7ft pencil of a 3wt.  Frustrated with my lack of success in the city park in the 30 minutes we were there, and at the crowds, we headed downstream to our last stop of the day.

The lower section of Crane Creek is phenomenal.  It has a little something for everyone.  The water is bigger here and there are lots of places the river can not be crossed.  We weren’t going to fish this section, as it was already 2pm and we still had to drive back to St. Louis, but the water looked too good not to fish, so we grabbed our rods and hit the stream. 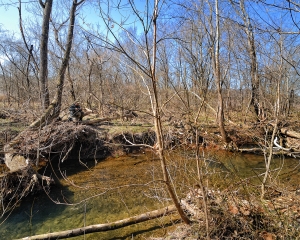 We fished downstream picking up some fish, and losing some more.  I had just lost my last fly for the day, so I headed over to McClane to see if he was ready to call it when we were greeted by a fellow who introduced himself as “Ray from Crane”.  “Ray from Crane” was an interesting character, as he walked up to us with his two hunting dogs wearing his gun holster.  Only in Missouri after watching scenes from Deliverance did I have backwoods thoughts running through my mind.  But come to find out we had common friends and we got to talking a bit and what not and he had offered to show us the rest of the river.  And with that, we got a tour of the river and conservation area that couldn’t be bought.  We hiked an old railroad track high above the creek as Ray pointed out spots to fish and ways to fish it.  Old timers like this certainly are a wealth of information, and I appreciate him taking the time to pass on his experiences with us.  If there was one mistake that I made, it was asking about the deer hunting on the property, and with that McClane and I took off on a upland hike with “Ray from Crane” and his dogs to see the rest of the conservation area (I have no idea how far we walked, but it was awhile).  We got back to the parking area shortly before dark, shed our waders and hit the road; home by 10:30pm.  Not a bad day of fishing in my book.

More of the photos are below.