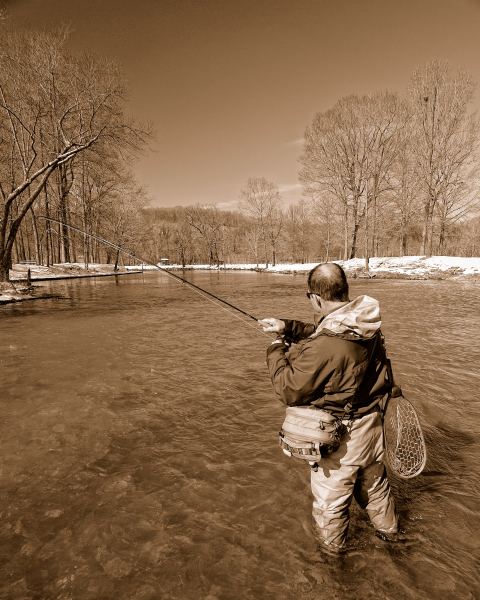 Brent McClane hooked up on Maramec Spring Trout Park during the 2010 winter catch & release season.  The C&R season is a great time to hit the trout parks and not have to fight the crowds, especially when there is snow on  the ground. 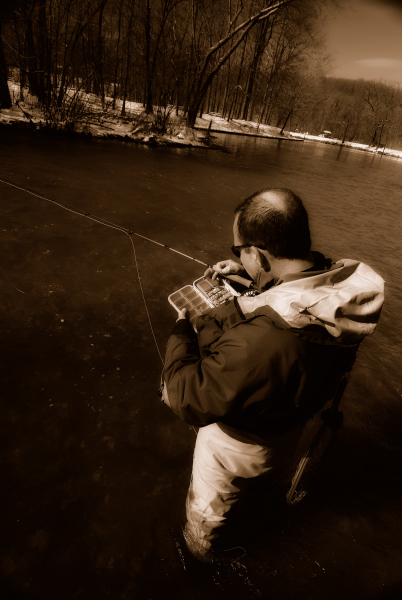 Brent McClane on Maramec Spring Trout Park during the 2010 winter catch & release season.  It started out a cold morning, but due to the snow we had the place almost to ourselves for most of the day. 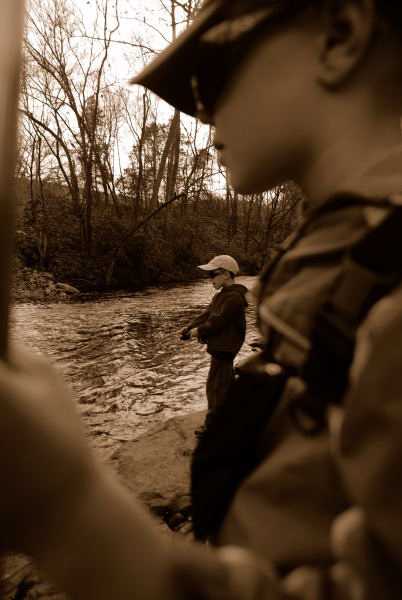 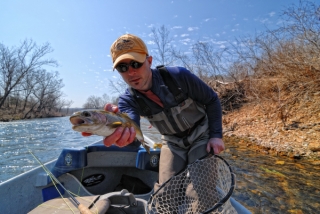 With an invitation like I received earlier this week from Brian Wise, I was really looking forward to heading down to the North Fork of the White River for a float. The weather was supposed to be really nice (although, we could have done away with the bluebird skies), and any day on the river is a good day. So I took off after work on Friday, and rolled into the metropolis of Gainesville, Missouri about 10pm.

Up early and a 6am breakfast at Skeeter’s (where the waitress revealed that there was no “gravy” to be served this morning; gravy is like coffee for me….so my morning didn’t start off as I had hoped….but it wasn’t bad), and we were rolling into the Kelly Ford access on the North Fork of the White River. We were met by two guys who had their truck parked and were camping on the “boat ramp”, prior to launching their canoe for a day of fishing. In truth these guys probably didn’t know any better, and we were able to slide the boat down over the tree roots, but backing the trailer up with the longer wheel base durango was a little bit more difficult. They were trying to be helpful, offering up fly suggestions as we were rigging our rods and what not; and with that I popped my first Stag beer of the morning (Stag is a highly under-rated beer). 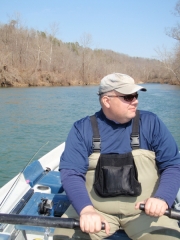 Brian and I decided to switch off rowing after every fish. I was up front first, and within the first 10 minutes or so I had a fish on. It was a dink, but it was a wild rainbow and it fell pray to rubber leg and prince nymph dropper under an indicator about 7ft deep. And like that, I was on the sticks and Brian was up. He popped 2 or 3 fish rather quickly and we swapped out again just as McKee bridge was coming into site.

The day pretty much consisted of the same rubber leg / prince dropper combo with lots of weight and deep with plenty of fish brought to hand (including a sucker….caught by your’s truly).  With switching on and off the oars.  I think I might have even impressed Brian as I rowed him through the “Rock Garden” with so much as a tap of a rock — at the bottom he offered a triumphant fist bump of his approval. 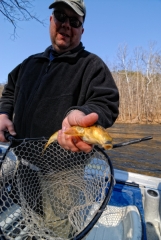 The only excitement came when I started to throw a sink tip and a Galloups Articulated Fat Head Minnow and got a big dark shadow to appear on my fly and then disappear.  I did manage one other strike, but with the bright skies, we weren’t expecting much of a streamer bite.  I guess, the other excitement came as Brian hopped out of the boat in an effort to net a sucker I had caught and took a bath.  I am not sure if it was the actual act of hoping out of the boat, or the Stag Beer we were drinking, or the fact that I hooked a sucker which caused the excitement but either way we had a good laugh.

As the day warmed up, there was a pretty large caddis hatch that was coming off (with big caddis…close to a #12 or so) and I actually got to see ALOT of fish rising in the North Fork of the White River, which was cool; but we didn’t have a single dry fly among us (less some Turk’s Tarantula’s….which are always good to have).

There were alot of people on the river, as we were floating down along the road to Kelly Ford there was a raft with a fishing frame driving in. So in total, we weren’t on the water more than 20 minutes and had already seen 2 more boats. The weather was nice, and that trend continued as we saw several canoes and at least 5 separate pontoon boats, and Tito and a buddy brought their Hyde over from the Eleven Point for a float as well.

Tito received a Hyde Contender series drift boat for Christmas.  He and his buddy put in just below the Parker Bridge access and floated to the James Bridge takeout.  His boat is a high side drift boat like mine, but his is a walk-around model (where mine has bench seats).  I have to tell you, I was impressed with his boat.  The only issue is getting under the bridges at McKee and Patrick with a high side drift boat….not going to happen at 650CFS for the Patrick bridge.

We floated from Kelly Ford to James Bridge, which essentially covers all of the trout water on the North Fork of the White River.  As stated earlier, the water flow was about 650 cfs, and that was the max for getting Brian’s lowpro clacka underneath the Patrick Bridge.  He actually had to walk the boat under the bridge and hang off the bow of it to get it to fit under the bridge.  My Hyde would not have made it under the bridge, without filling it with water to make it float lower, and then bailing the water once on the other side.

This was also my first time fishing the water below Patrick, and I was impressed with it for sure.  This section of the water is mainly a stocked brown trout fishery, and this is what we caught mostly in this section.  I would definitely fish this section of river again, as the river gets wide in this section, but there is a variety of water to fish between Patrick and James Bridge.

I can’t say enough good things about the North Fork of the White River.  This river is awesome and fishes extremely well from a drift boat.  Every fish we caught today came while floating, if we would strike on a fish we would row upstream (in spots where that was practical) and float it again and pick up another fish.  Numbers wise, we boated between 20 and 30 fish which made for a great day in the boat.

We finished up our float about 5pm and headed back to Gainesville to drop off the boat and then to West Plains for dinner at El Charro before I drove back to St. Louis for my daughter’s 8th birthday on Sunday. Rolled in to my driveway at 10:45pm dead tired, all in all a great way to start a weekend. 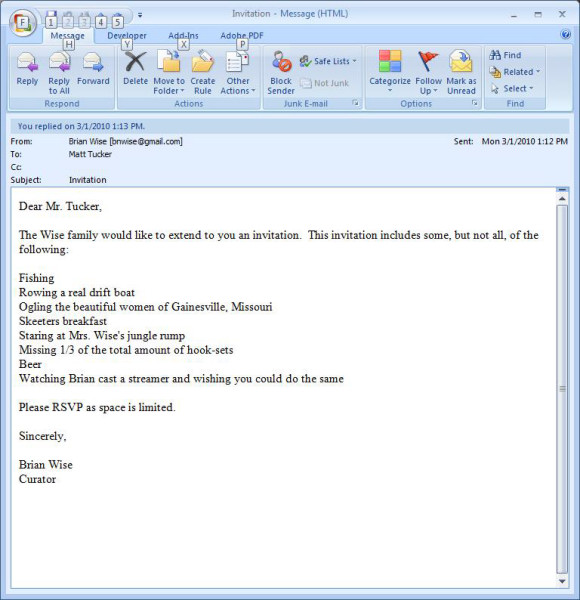 How do you pass up an invitation such as this?

That is right, I am headed down to the North Fork of the White River to get my hat handed to me for the first time in 2010.  It is hard to pass up an invitation like this (besides, the girls have kicked me out of the house this weekend for an 8yr old slumber party…..win/win).  Dreams of 20″ rainbows and 24″ browns dance in my head (I have been told they are there, in some countries it might be said that they are promised).  Will the illustrious guide extraordinaire deliver or will the lackey angler screw it all up?  Tune in next week.